Many people use the MKV format extensively. MKV files may be high quality Blu-Ray rips, OBS captured footages, or something else. However, when we try to import MKV file into Adobe Premiere Pro - the most popular industry standard video editing software in the world, the file import failure window will pop up with an error message "File format not supported" or "Unsupported format or damaged file".

I've been editing videos using a .mkv file format in CC 2019 on windows 10 but I noticed not only does CC 2019 on Mac OS not import .MKV but when I upgraded to CC 2020, my older projects and a new project I created doesn't let me import .mkv. I have no idea how I got mkv to work on CC 2019. – Adobe Support Community

Does Premiere Pro support MKV? Actually, Adobe removed MKV support with the release of Adobe Premiere CC 2019 13.1.3. In this case, you need to remux or convert your MKV files to Adobe supported formats with WinX HD Video Converter Deluxe. Just free download it to have a try! 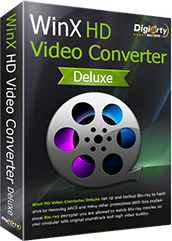 According to Adobe help center, we find that MKV isn't in the list of Premiere Pro supported file formats. In fact, MKV was a native support format in Adobe Premiere Pro CC 2018 12.1 and later, although any official announcement about this improvement can't be found. Below are words quoted from Adobe's blog:

And with the release of Adobe Premiere CC 2019 13.1.3, Adobe removed the support for decoding MKV. Why Premier Pro dropped the limited support for MKV? The Adobe Community professional RjL190365 and R Neil Haugen make a guess.

They can't code for unlimited number of codecs, and maintain performance and stability. So they are continuing support for some codecs that have still a large use in their pro base, and discontinuing lesser-used codecs. MKV is definitely a 'niche' use codec, no matter how good it be.

Although MKV isn't supported in Premiere Pro, it doesn't mean that you cannot import MKV files into Premiere.

If your MKV file can play fine but can't be imported to Premiere, then file import failure should be due to incompatible file format or codec missing instead of file corruption.

Some people may suggest you to try installing the K-Lite Codec Pack to fix MKV import failure. However, we don't recommend this because this has been known to cause issues with the Adobe Suite, such as crashes, slowdowns and other issues.

Here we'll introduce 4 simple and workable ways for you.

Sometimes, we simply need to change the file extension from mkv to one that Premiere supports and then we can get rid of file import failure.

Right click on your .mkv file, and choose Rename. Then, change the file extension from mkv to mp4, avi, or something that Premiere Pro can recognize. Then click Yes when a warning pops up. Once done, put the file into Premiere Pro and see if it can be imported without error now.

Sometimes, Premiere Pro can support the video and audio codecs in your MKV video but just doesn't support the MKV container format. In this case, you can simply remux the MKV file to an MP4 container without changing video/audio codec inside. WinX HD Video Converter Deluxe can remux files quickly and help you import MKV into Premiere without converting.

Step 3. Manually tick Auto Copy on the lower right corner of the UI.

Step 4. Hit RUN. Then WinX will put your video and audio files into MP4 container without recoding and re-encoding. Faster still, the built-in GPU hardware accelerator engine will further elevate MKV to MP4 remuxing procedure once your laptop supports HW acceleration, as well.

If rename and remux don't work, it probably means that Premiere Pro doesn't support the video and audio codecs in your MKV video. Then, you need to convert MKV to a more industry standard format that Premiere Pro supports. This can also be easily done with WinX HD Video Converter Deluxe.

Step 1. Open WinX HD Video Converter Deluxe, and click the + Video button to browse and open target MKV file. Alternatively, you can simply drag and drop the source MKV file into this converter.

Step 2. Choose an output profile that Premiere Pro supports. Every profile has codec information. If you're not sure which one to choose, you can go to General Profiles, choose MP4 Video, and hit OK.

The aim of forums and Q&A sites is to let users help each other. These sites indeed play their roles in troubleshooting. On Quora, users share their solutions, among which using FFmpeg is a practical way to have a try.

So above are the fixes for MKV not supported in Premiere Pro. Hope they can get you out of trouble.

What Is the Best format to Export from Premiere Pro?

Looking for an application to edit MKV metadata? You're in the right place.This article introduces 5 effective MKV metadata editors to edit or add metadata for MKV files.

How to Solve Adobe Premiere Pro MP4 No Video Only Audio Error?

Is there no video but only audio when importing MP4 to Premiere Pro or exporting from it? Here are reasons and how to solve Adobe Premiere Pro MP4 no video problem.

What Formats Does DaVinci Resolve Support? 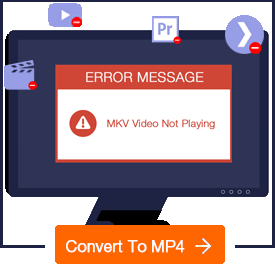