How to copy Blu-ray to PC using Blu-ray decryption software.

3D effect is destined to give audiences a fantastic and lifelike visual experience. Since 3D Blu-ray come into being, the owners are enabled to watch 3D movies at home instead of going to cinema. But in order to well enjoy 3D blu-ray movies at home, one needs:

Watching 3D Blu-ray movie requires high, but with low guarantee in the use life of Blu-ray disc as carelessness happens occasionally and unexpectedly by children and adults. So we have to preserve our Blu-ray discs very carefully against scratch or loss. Besides, unlike 2D video which is acceptable by many mainstream players, 3D Blu-ray is so poor in compatibility that it can be played only by few. So, it would be nice and thoughtful if some tool can decrypt 3D Blu-ray to 2D video to backup it on the hard drive of computer.

But as we know, most Blu-ray discs, both 3D and 2D, are encrypted with advanced encryption technology. The most common and famous ones are copy protection BD+ and BD-Live, etc.

WinX Blu-ray Decrypter is professional Blu-ray backup software which grows to cope with all tough problems in Blu-ray copy. By now, even the latest MKB v25 or bus encryption is a piece of cake for this decrypter.

In short, the output 2D video file is in file form with smaller size and only the main movie title and selected title, whereas the 2D Blu-ray folder can be considered as the complete content copy of original 3D Blu-ray Disc in folder form, comparatively, with bigger output size and longer conversion time.

The output 2D video can be played by 5KPlayer, KMPlayer, VLC, MPlayer and many other media players.

Actually, the way of decrypting 3D Blu-ray movie to 2D is as the same and simple as 2D to 2D Blu-ray backup.

After you download WinX Blu-ray Decrypter, you can make your 3D to 2D Blu-ray movie backup rock and roll!

In two cases, I'd like to specify the operation separately in title mode and folder mode.

As explained before, Title mode refers to decrypting 3D Blu-ray disc to 2D video file with main/selected title only. The steps are as follows:

Run this Blu-ray decrypter before/after you import your Blu-ray disc in your computer (with Blu-ray drive) -> click on "Load BD" button -> choose "Title Mode" button -> tick "Only Main Title" option of your own free will -> browse and determine the location of your decrypted 2D output file -> hit "run" button to decrypt 3D Blu-ray to a 2D video in Blu-ray video file form. 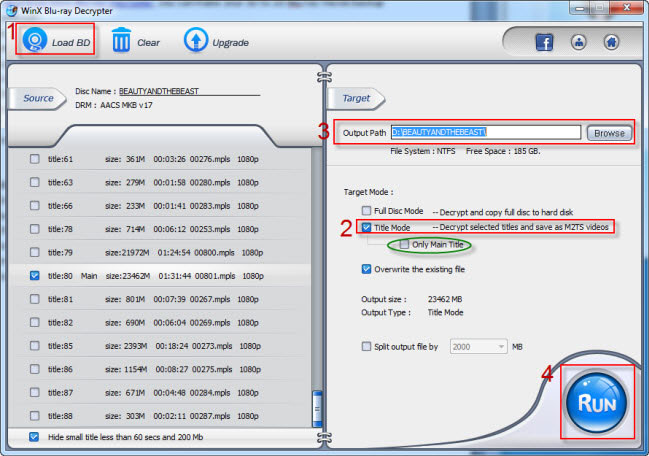 Full Disc mode refers to decrypting 3D Blu-ray disc to a 2D Blu-ray folder with complete movie/video content. The steps are as follows: 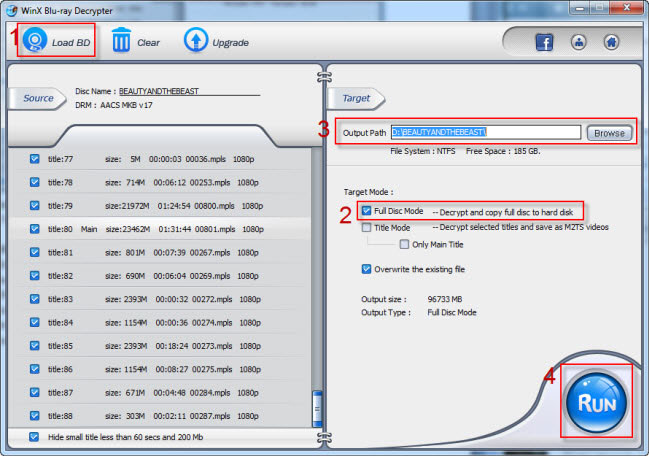 After that, you can play the decrypted 2D Blu-ray video by KMPlayer, VLC, MPlayer and DAPlayer, etc.

Graduated from Nanyang Technological University, Singapore, she employs herself in IT related content creation (since 2013) and happens to perfectly combine her major (computer & science) and her gusto (writing). She's seasoned at offering video audio conversion workarounds and always passionate about new trends, from hot HEVC, 4K to the new AV1 codec.

It will cost you about 6 mins to read through the article. You can skip to: