What Is VLC Media Player

Get to know what is VLC media player.

"It plays everything!" - As VLC announced on its official site. VLC Media Player (short for VLC) is a free and open source media player and multimedia framework written by the VideoLAN project. VLC is a portable multimedia player, encoder, and streamer supporting many audio and video codecs and file formats as well as DVDs, VCDs, and various streaming protocols. It is able to stream over networks and to transcode multimedia files and save them into various formats. VLC is used to stand for VideoLAN Client, but since VLC is no longer simply a client, that initialization no longer applies.

VLC is one of the most platform-independent media players available, with versions for Microsoft Windows (10), Mac OS X, GNU, Linux, BeOS, and BSD. The default distribution of VLC includes a large number of free decoding and encoding libraries; on the Windows platform, this greatly reduces the need for finding/calibrating proprietary plugins. Many of VLC's codecs are provided by the libavcodec library from the FFmpeg project, but it uses mainly its own muxer and demuxers. It also gained distinction as the first player to support playback of encrypted DVDs on Linux by using the libdvdcss DVD decryption library.

But there still exist some VLC playing errors, like "VLC is closed with no reason", "VLC can't play MKV, MOV, MP4, DVD" and some other supported videos. If so, it is recommended to:
1. Convert video to some mainstream formats like MP4, AVI for better playback on VLC;
2. Download another media player as VLC alternative.

VLC Media Player has been downloaded more than 176 million times, and it fills all your needs. It can handle DVDs, (S)VCDs, Audio CDs, web streams, TV cards and much more. You don't need to keep track of a dozen codec packs you need to have installed. VLC has all codecs built-in. It comes with support for nearly all codecs there are. And what is more it can even play back the file or media if it is damaged! Missing or broken pieces are no stop to VLC, it plays all the video and audio information that's still intact.

VLC is popular for its ability to play the video content of incomplete, unfinished, or damaged video downloads before the files have been fully downloaded (e.g. files still downloading via BitTorrent, eMule, or Gnutella). It also plays m2ts MPEG transport streams (.TS) files while they are still being digitized from an HDV camera via a FireWire cable, making it possible to monitor the video as it is being played. This is because it is a packet-based player.

The player also has the ability to use libcdio to access .iso files so that the user can play files on a disk image, even if the user's operating system does not have the capability of working directly with .iso images.

VLC supports all audio and video formats and all file formats supported by libavcodec and libavformat. This means that VLC can play back H.264 or MPEG-4 video as well as support FLV or MXF file formats "out of the box" using FFmpeg's libraries. Alternatively, VLC has modules for codecs that are not based on FFmpeg's libraries. This feature is not unique to VLC, as any player using the FFmpeg libraries, including MPlayer and xine-lib-based players, should be able to play those formats without the need for external codecs. 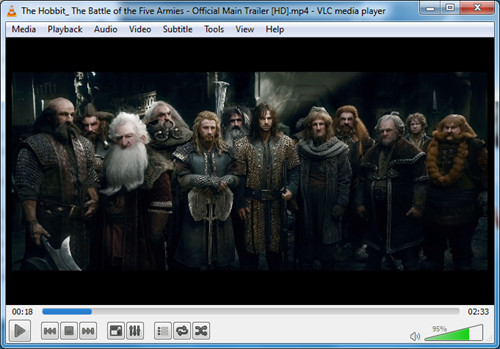 VLC is one of the free software and open source DVD players that ignores DVD region coding on RPC-1 firmware drives, making it a region-free player. However, it does not do the same on RPC-2 firmware drives. VLC media player has some filters that can distort, rotate, split, deinterlace, mirror videos, create display walls, or add a logo overlay. It can also produce video output as ASCII art. Using a FireWire connection from cable boxes to computers, VLC can stream live, unencrypted content to a monitor or HDTV.

VLC media player can display the playing video as the desktop wallpaper, like Windows DreamScene, by using DirectX (only available on Windows Operating Systems); can do screencasts and record the desktop.

On Microsoft Windows, VLC also supports the Direct Media Object (DMO) framework and can therefore make use of some third-party DLLs. On most platforms, VLC can tune in to and view DVB-C, DVB-T and DVB-S channels. On Mac OS X the separate EyeTV plugin is required, and on Windows it requires the card's BDA Drivers.

VLC can be installed and run directly from a flash or other external drive and can be extended through scripting. It uses the Lua scripting language.

VLC is notable for excellent media supporting. But there are still some codes/files that might in fact not be supported by VLC. And you need to do some codec settings before you can actually play some videos on VLC. You may also encounter VLC no sound and external subtitle not loaded error when playing MKV or other videos. Additionally, VLC won't play DVD that is protected. You have to install libdvdcss to cope with region code or css.
>> Reset VLC to Default with "vlc --reset-config"
>> VLC MKV playback issues
>> VLC shows green screen when playing DVDs
>> [VLC Troubleshooting] How to Fix VLC No Audio Error

If you have tried your best but the error is not fixed yet, another full-featured VLC alternative software for Windows (10) and Mac named 5KPlayer is recommended to you. 5KPlayer is an all-in-one video/audio player which can play all audio/video files easily and smoothly, including M2TS, AVCHD, TS, MKV, MPEG4, H.264 video formats as well as DVD video and music audio files. 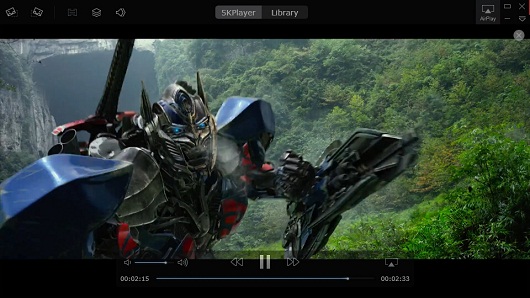 Preloaded with tons of video codecs and audio codecs, it fully supports Multi-track video/audio and subtitles. In a word, this succinct 5KPlayer is guaranteed to deliver the highest quality viewing and listening experience on Windows PC and Mac.

Learn how to resize your large (MP4 or other) video with VLC on Windows (10) or macOS computer by changing crucial factors that determine the file size of a video.

It will cost you about 6 mins to read through the article. You can skip to:

2The Advantages of VLC Player