Program stream (PS or MPEG-PS) is a container format for multiplexing digital audio, video and more. The PS format is specified in MPEG-1 Part 1 and MPEG-2 Part 1. The MPEG-2 Program Stream is analogous and similar to ISO/IEC 11172 Systems layer and it is forward compatible.

Program streams are created by combining one or more Packetized Elementary Streams (PES), which have a common time base, into a single stream. It is designed for reasonably reliable media such as disks, in contrast to MPEG transport stream which is for data transmission in which loss of data is likely. Program streams have variable size records and minimal use of codes which would make over the air reception difficult, but has less overhead. Program stream coding layer allows only one program of one or more elementary streams to be combined into a single stream, in contrast to transport stream, which allows multiple programs. 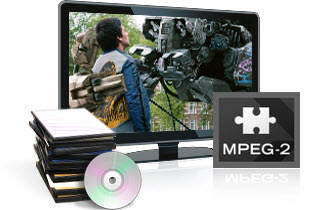 Program streams are used on DVD-Video discs and HD DVD video discs, but with some restrictions and extensions. The filename extensions are VOB and EVO respectively. Blu-ray Video discs contain streams in BDAV container, which is based on the MPEG transport stream (TS) format with an additional 4 byte time code added to the beginning of each TS packet.

International Organization for Standardization authorized SMPTE Registration Authority, LLC as the registration authority for MPEG-2 format identifiers. It publishes list of compression formats which can be encapsulated in MPEG-2 transport stream and program stream.

For PC and Mac only. Mobile user Click here.

This page gives specifc definition of what is MPEG, what are the advantages and disadvantages and how to convert DVD/video to MPEG vidoe format.

By copying DVD to mono-track MPEG2, you can make complete DVD movie content with selected sound track and subtitle at fastest speed.

Home > Resource > What Is PS

You can skip to:

Part 1The relationship between PS and DVD Disc

MPEG vs VOB, Difference Between MPEG and VOB File